Mama likes this film and I loved Brugge.  Lots and lots of statues.  And horses.  Mama did have to stand up holding me on a bus full of school children all the way back though - huffing and puffing about manners.  I sang to them and they liked it.  Still didn't give up their seats though.

So we went around Brugge with me spotting every statue in sight and asking to go and touch them.
Mama looked quite tired at the end of the day.  Especially after the bus ride.  But I discovered Belgian choc chocs.
There's a big storm going on here with thunder and lightening and big hail stones and the van is shaking about.  I am sooooooo excited.  I think we might blow away.
Posted by Joe Blogs at 20:31 1 comment: Links to this post

Mama and Daddy took 2 days to get to Dover.  We stopped at a great site at Pevensey Bay where Mama was happy because she could hear the sea at night and then onto another site very close to Dover called Little Satmar.  Mama rang for a Chinese delivery and we were very excited to have it delivered to our camper van.  It was good too.  Anyway, Mama got in a bit of a flap because of not having a working phone so she said that we couldn't leave and had to wait a day until her number transfered but then it worked in the morning so we could leave!  I was terribly happy.  I sang the Big Ship sailed on the Ally Ally Oh but Mama wouldn't let me sing the verse when it sinks to the bottom of the sea.  We had lunch and then I fell asleep whilst Mama oohed about about being on the sea.  Suddenly they were waking me up and Bonjouring all over the place.  I soon got into the swing of it.


They parked up in a car park called an Aire by the beach.
The beach was wonderful.  Full of sand.  Sand was everywhere.  Mama was happy because we didn't have to pay but they soon ran out of charge for their mobiles and Mummy frets if there isn't any internet.  She just can't leave her gadgets alone.  I have tried to introduce her to the joy of crayonning.

I got to see lots of statues.  The French like a statue.  I had my photo taken with Mr and Mrs Mitterand in the centre of Calais and also with one by Rodin.  Mama used to say I was a bit of a thinker when I was born so I suppose that's why I liked it.


Mama was so happy to be back in France.  She explained all the signs to me and and translated all the menus we passed even if we weren't hungry.  Daddy kept pointing out the dog caca.  He's at it now as well as Mama and Nana.  They are like the caca police - my family.

Oh and I discovered la baguette.  The lady in the local bakery called me petit monsieur and I would go and get the bread every morning and eat most of it before I got back to the van.

Change of plan - back to Dorset

After our 2 goodbyes to Nana - we head back for a third.  The leisure battery isn't working properly and the original plan to head to Chorley Wood  for a few nights before leaving the country has been changed again.  What are the No- funs upto?  Pouring with rain.  Mama muttering under her breath.  Find another pub campsite in Hixon, Staffs.  http://thehixongreenman.co.uk/  I've had enough of being trapped by the time we arrive.  Traffic terrible.  £15.00 a night but no showers or toilets.  Can't remember when Mama had a shower last.  I don't care as long as she doesn't make me have one.


Daddy takes me off for a drink and the pub goes a bit quiet when we go in.  I try and cheer them up but they're having none of it.  Daddy says it's the best pint he's had in ages.  There's a really beautiful sunset but it's cold.  Really cold.

Mama gets on her got to get up early in the morning.  They set off in the pitch black.  Mama thinks it's funny to take photos of me asleep.  She sleeps with her mouth open too you know.

Anyway, we had a quick trip up to London in the car for some business of Mama and I got to see my friend again and then I got to see Nana and Daddy bought a new battery.
Now they tell me they are taking me on a big boat at the end of the week. Going to France! Mama has taught me to say 'Bonjour and Merci' so I am quite excited.
Will have to say bye bye to Nana again.  Leaving Wednesday for the longest trip in the world along the South coast.
Posted by Joe Blogs at 07:26 No comments: Links to this post

So Granddad Geoffers had found a campsite very close to him and my Grandma Brenda and Granddad Ernie.  http://www.smithsonfarm.co.uk/ ( Do you know I have 4 Granddads but only 2 Nanas.  How does that work?) It was a Caravan and Camping Club site at £15 a night.  We arrived there at 1.30 and parked in the car park.  Mama jumped out to find out where the site was and discovered we were in it.

The North of England is so very green.  A different green to Dorset.  It was cold though.  We had stopped at Sandbach services and changed out of our shorts and into our thermals.  Granddad Geoffers came over to see us and brought the Mr. D which Mama had ordered.  Mama was beside herself.  I have never seen anyone get so excited about a pan!   Apparently it is a slow cooker which works without heat.  So what!  http://mrdscookware.com/ She is mad for it.
We walked to an Indian restaurant up the road.  The Shapla.  http://www.tripadvisor.co.uk/Restaurant_Review-g503927-d3806755-Reviews-Shapla_Indian_Restaurant-Burnley_Lancashire_England.html
Mama had been singing her 'I'm gonna eat chilli song' for hours.  She claimed she hadn't had a chilli since leaving Tooting but I don't believe her.  She did that embarassing thing in the restaurant of  asking the waiter a hundrerd trick questions to find out if it was going to be authentic food and then looked sad when it wasn't.  I had a great time.  They were really nice and really friendly.  I ate everything up as it wasn't hot at all.  I also made friends with a man called Jeff who shook my hand and said it was terribly nice to meet me.
The next day we walked to Brierfield along the canal which is beautiful. 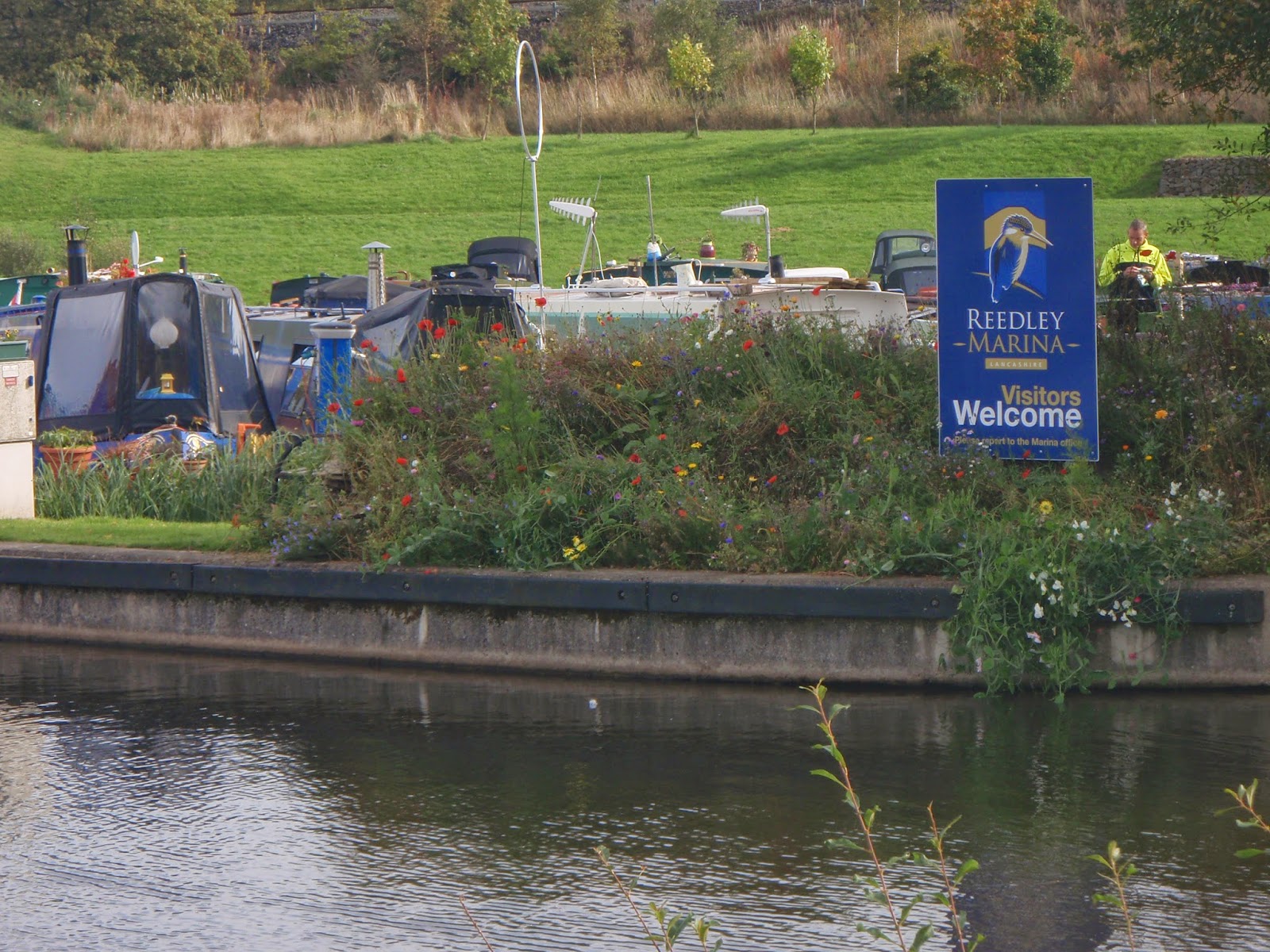 It was full of sunshine.  They have built a marina where you can hire barges.  Mama made lunch in Mr. D and we drove to Grandma Brenda's house and parked outside.  She and Granddad came in and we had lunch and wine and cheese and sat parked in the road for 2 hours.  It was great.  I showed them round the van.  Mr D's lunch was a success and I think Daddy may have had to eat his hat.
Aunty Jayne and Aunty Ping and Aunty Joyce and Uncle Keith came to see us the next day.  They are lovely and said they are going to come and see us in Spain which I would like very much.  We went for dinner with them.  To another pub!  I like pubs.  I like my Aunty Ping and Aunty Jayne.  I missed them when she went.  Mama drank a bit too much as she was very grumpy the next day.  She said she was grumpy because the site charged her £10.50 for the electricity which was only running our fridge for 3 days and they wanted 2 x 50p for every 5 minute shower.  I think it was because she had quite a few glasses of beer.  She refused to shower the whole time we were there.  And she kept moaning because there wasn't any internet.  And I stood in dog caca.  And there was more dog caca at the back of the van.

I liked it there because we had chickens come and visit and ponies and dogs and I don't mind dog caca.  The dog is worth it.

Posted by Joe Blogs at 11:51 No comments: Links to this post


So they finally dragged me away from Nana to set off on this wild goose chase.It was such a beautiful day at Durderlee door that it was a shame to leave.  We headed off up the M5 and came across this amazing service station near J11 called Gloucester Farm.  It really took the biscuit.  None of the Old MacDonalds or the Little Thiefs.  Just lovely home made cakes and a beautiful building.  They even had a pond with a water fall.  mama liked it so much, she wrote to them to ask if we could stay overnight and they say yes - for £20.  http://www.gloucesterservices.com/


Anyway, it took an absolute age to get there so Mama came up with the bright idea to look for pubs with campsites.  She found a great site where you could search by map http://www.ukcampsite.co.uk/ and picked the closest one which was in Tewsbury.  The Hawbridge Inn.  It was fabulous.  Playground for me,.  Hot shower for Mama and a good pint for Daddy.  £9.00 a night. http://www.hawbridgeinn.co.uk/
We went for a lovely walk along the River Severn.  Daddy went on about the longest river in Britain and watersheds and Mama banged on about some bloke called Laurie Lee and took thousands of arty photographs.  I have only let her put a few on here as she gets so carried away.
I had yet another dinner of chips and juice and went a bit mad on the sofa.  Mama decided that it was a good idea to try the van without electric hook up and that's when it all went dark.   We spent the rest of the evening in torch light.  Very exciting.  Daddy says we need a new leisure battery.

Mama then insisted on us all  getting up at 4 in the morning to get ooop North.  That was fine with me as I had been awake since 2.30.  On the way she kept reading out the motorway signs which said 'Tiredness kills'.  I don't know why she kept staring at me.
Scary lady.

Posted by Joe Blogs at 21:28 No comments: Links to this post

Joe Blogs
London, United Kingdom
Hello. My name is Joe and I was born in June 2012 to rather old and decrepit parents. They thought they didn't want children before I came along - and boy have I turned their world upside down! Anyhow, mum is terrified of having to do the 'having children and settling down' thing so she and dad bought a camper van in 2014 and have been on the road since and are still homeless. We have been mostly in Europe on campsites and free camping. I said I would keep this blog for them to remind them how they made me suffer.